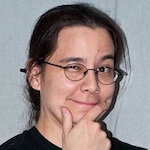 New artists have been added to the Bi Lines program!

Our program will include multiple readings, live music, projected art from a bisexual comic anthology, capped off with the Bisexual Book Awards Ceremony.

This is what we've confirmed for the program so far, with more to come: